The young man of God who stood before me was in deep turmoil. He had heard a horror story of a minister who lived in obscene wealth, had several mistresses, and who told anyone who criticized him that God would kill them if they exposed him or left his church.

The young man wanted comfort, but I had none to give. I had to break it to him that this is sickeningly common. The vileness that is currently going on behind closed doors is worse than ever in the past. I get reports every day of people in pulpits living in depraved indifference.

The conditions today exceed what we saw in the evangelist scandals of the 1980s, and even the kind of cultic activity we saw with Jim Jones because it is starting to happen on a wide scale. We are watching the rise of many voices who blatantly believe they can do anything they want, and no one has the right to criticize them.

The young man turned to me and shouted “that man is demonic.”  I replied, “Son, he is worse than demonic—he is an atheist.”

It is true: that crooked preacher—that immoral church leader—is an atheist. Nothing else explains it. 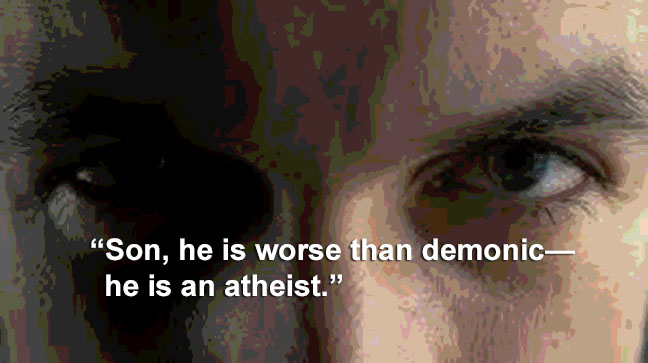 The fact is, they do what they do because they believe there is no God. If there is no God, then they can go on with their evil lifestyles. Remember: an atheist cannot find God, for the same reason a burglar cannot find a policeman. This is the key to understanding this wickedness in the pulpit. Look at these verses:

Romans 3:13 “Their throat is an open tomb; with their tongues they have practiced deceit; the poison of asps is under their lips; 14 their mouth is full of cursing and bitterness. 15 Their feet are swift to shed blood; 16 destruction and misery are in their ways; 17 and the way of peace they have not known. 18 There is no fear of God before their eyes.”

The list of crimes is stated from the bad to the worst. It begins with deceit; then they are called snakes; then, in their mouths are nothing but curses and bitterness; then it escalates to violence and murder; then they are capable of nothing but destruction and despair; and finally, all they know is war, and none of their ways are ways of peace. But their ultimate crime is: they do not fear God. They are atheists.

Many Christian leaders are under the influence of a virus–the love of money. I call it affluenza. Affluenza is addiction to money and lifestyle. This materialism is not to be confused with true prosperity or the balanced teaching of the word of faith where you teach that you are blessed to be a blessing.  The Bible teaches that God will prosper His own.

I am talking about greed. This greed pushes a preacher to put out a message that makes them money. There are even preachers who preach stern messages, even gloom and doom just to make money. They are not yet atheists but they are moving in that direction. 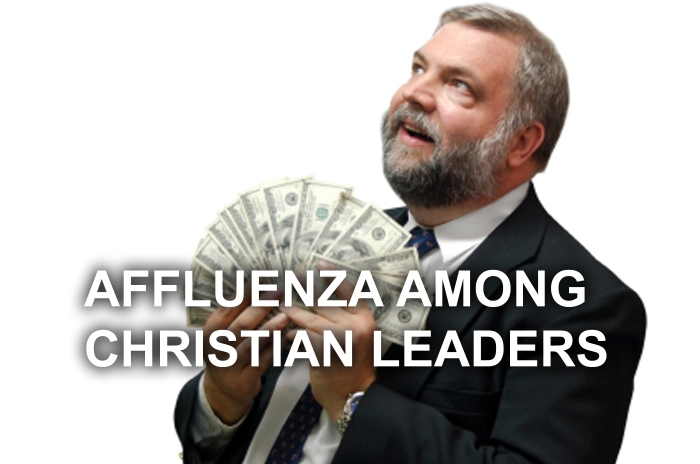 I believe that most atheists are actually agnostics. They can boast all they want to that they don’t believe in God, but most of them realize—and, if pressed, they will reluctantly admit—they have no proof that God does not exist. It is impossible to prove that negative.

Press them even further and you will find their rants are tied to a hurt they have experienced, either in church, or a tragedy that wounded them. Many atheists are simply agnostics who are mad at God. But if you are mad at someone, you are acknowledging that the object of your anger exists.

The true atheist is experiencing a mental lapse. Franklin Graham said, “The Bible tells us in several places that only the fool says that God does not exist. “The fool has said in his heart, ‘There is no God’” (Psalm 14:1). That Scripture is repeated verbatim in Psalm 53:1, and the same sentiment is expressed in numerous other biblical passages.”

Atheism removes the fear of the Lord. If there is even an iota of the suspicion that God does exist, it gives you pause before you do evil. But when that pause button is removed—and there is no longer any fear of God—you no longer fear what God will do about your evil.

That atheism is at the root of aggressive evil and arrogance is clearly seen in Psalm 73:8, “They scoff and speak wickedly concerning oppression; they speak loftily. 9 They set their mouth against the heavens, and their tongue walks arrogantly through the earth…11 and they say, “How does God know? Is there knowledge in the Most High?””

Here is the contradiction: an atheist looks at the sky and curses the God they say does not even exist, with total contempt. It is their final statement that is the heart of true atheism.  “Is there knowledge in the most High?” In other words, they are mocking God, saying, “This so called God of yours, doesn’t have a mind, and is devoid of knowledge.” This is simply saying, “No one is watching me.”

When that preacher seduces women, when they steal money from the sheep, when they live with no remorse over the glaring contradiction and hypocrisy of their lifestyles, it is because they believe there is no God. There is no fear of God before their eyes. 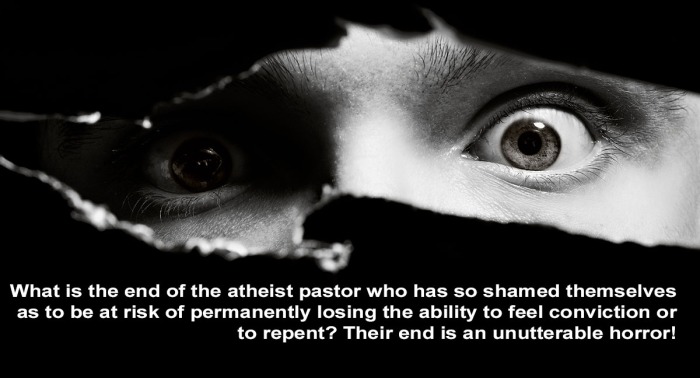 Entertainers like Bill Maher, theoretical physicist Stephen Hawking, British professor Richard Dawkins, and others, have publicly promoted a brand of atheism that is openly hostile to Christians, but they are not they highest form of atheism.

The true atheist is evil enough to stand in a pulpit and claim they represent God—even as they live in total depravity. They steal money, saying, “No one is watching.”  They defile innocent people and say, “I have no Judge or Day of Reckoning.”

What is the end of the atheist pastor who has so shamed themselves as to be at risk of permanently losing the ability to feel conviction or to repent? Their end is an unutterable horror!

Psalm 73:18, Surely You set them in slippery places; You cast them down to destruction. 19 Oh, how they are brought to desolation, as in a moment! They are utterly consumed with terrors. 20 As a dream when one awakes, so, Lord, when You arise, You shall despise their outward appearance.”

Your destruction is like getting thrown out of a thirty story window. Special night terrors are reserved for you who pervert the ways of God. And to your utter horror, you will see the face of God. You will know the wrath of the Lamb.

“and they said to the mountains and to the rocks, “Fall on us and hide us from the presence of Him who sits on the throne, and from the wrath of the Lamb.” (Revelation 6:16)

Mario’s voice has been heard by millions around the world, bringing a message that zeroes in on the hurts of society. His simple declaration: Come and see. He is passionate about revival in America, spiritual warfare, prayer and healing and Christian and political leadership.